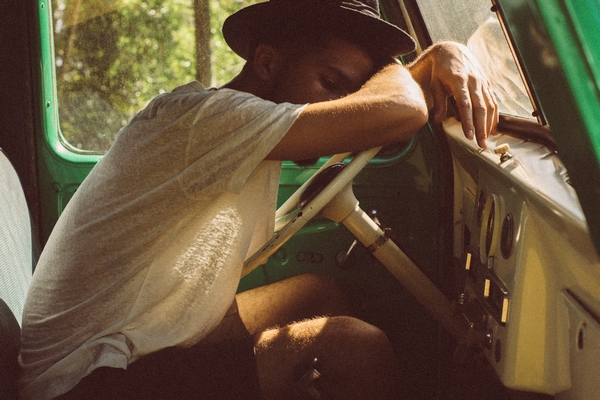 The Connection between Stress and Disease

When our coping mechanisms are exceeded, our body responds with an adaptation response: stress. The aim is then to restore the balance (homeostasis) between the person and their environment.

Note: Stress is a response, not a stimulus. Stressors originate in the environment or from within the person him/herself.

Critical life events are positive or negative experiences that require the individual to adapt. The consequences for each person vary since the individual’s experience varies when stressful events occur. The effects can range from a weakened immune system to a higher susceptibility to disease, psychosomatic disorders, and an increased risk of suicide.

Easily identified as very stressful Significant life changes Include events such as moving, marriage, divorce, and death of a loved one

Can accumulate to cause health issues

Effects of stress on psychological functions

If stress is sub-optimal, the psychological function can be compromised. It can lead to fatigue, irritability and the inability to concentrate.

The fight or flight response responds to acute stressors (fast-acting).

The stress hormones adrenaline and noradrenaline are secreted from the medulla zone of the adrenal gland.

Image: Noradrenaline and adrenaline. By Lecturio 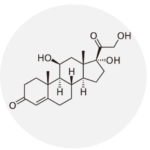 Cortisol is a glucocorticoid, a hormone that shifts the body from sugar to fat as an energy source. It keeps the blood sugar levels high during stressful situations, providing the brain with an ample supply. Prolonged-release of cortisol due to chronic stress can have harmful effects:

Emotional stress is correlated with worse health outcomes, and may exacerbate existing underlying conditions (i.e. cardiac, anxiety) and may contribute to the development of mood disorders.

Individuals may respond differently to the same stressor depending on appraisal and circumstance. We either confront or avoid (avoidance) stressors. Avoidance can be accompanied by habits such as substance abuse and unhealthy eating.

In response to high stress, some develop post-traumatic stress disorder (PTSD). PTSD is characterized by the symptoms of:

There is an optimal range of stress which can provide benefits. Three methods used to cope with stress include:

Can the level of stress resulting from critical life events be measured?

Creating the Social readjustment scale involves identifying ‘stress values’ for different major life events. The death of a partner, e.g., equated to 100 points, a job loss: 50 points. A truly objective comparison of personal experiences is not possible, due to widely-ranging individual differences in personality.

However, some characteristics increase the likelihood of a stress response, since a readjustment to critical life events is complicated by: 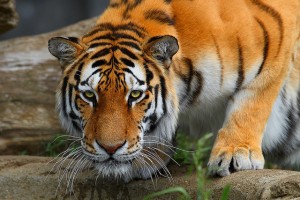 In a stressful situation, our body prepares for a possible fight or flight. In terms of the brain, the hypothalamus – the stress center – is significantly involved in this reaction.

One of the possible consequences of constant psychological stress (e.g., during the exam period) is summarized by this phrase, which has nothing to do with acute threat situations to the body. It is no longer helpful, but harmful. Prolonged periods of heightened stress increase the risk of cardiovascular and gastrointestinal diseases.

Individual-specific and response-specific reactions to stimuli

Physiological stress reactions occur in various organ systems. Usually, we have a ‘stress spot’ that responds in the form of symptoms: a headache, gastrointestinal complaints, and muscular tension. This reaction pattern is also referred to as the individual stereotype. On the other hand, some stimuli, such as sudden noise, always lead to the same reaction pattern in humans.

In 1956, Selye described the best-known model for reaction to chronic stress. He divided this into 3 phases: the alarm phase, the resistance phase, and the exhaustion phase.

This stress model dating to 1986 involves emotional stress reactions. As a result, stressors can trigger anger, fear or depression. These emotions, in turn, result in a neuroendocrine response pattern.

Not everyone reacts to stressors in the same way; the strain depends on the individual’s degree of vulnerability. Homeostasis describes a state of inner physiological, psychological, and social equilibrium. Stress threatens this state of balance.

Allostasis is the ability to maintain this state despite external stressors. Various genetic factors and acquired reaction patterns are responsible for this (variable) capability.

The Lazarus and Launier coping model: how do I assess a situation?

The coping model by Lazarus refers to this key question in terms of a series of steps.

Our Behavior and the Brain: the Electroencephalogram (EEG)

EEG measurements are especially important in psychophysiology and neuro medicine. Electrodes are mounted on the patient’s skull using a standardized schema so that the electrical activity of the brain can be deduced.

The spontaneous EEG displays basic electrical patterns derived by the machine, which can be measured in wake or sleep states without any external influence. Continuously discharging wavebands are represented over a longer period. EEG patterns differ according to age: in the case of children, the EEG shows lower-frequency waves and, in the waking state, theta and delta waves may also occur.

Four types of frequency bands are distinguished in the EEG (memorize this basic knowledge well!):

Changes in the brain’s electrical activity that have a time-based connection to a stimulus are referred to as evoked potentials. They are to be distinguished from the spontaneous EEG. The terms are distinguished in line with the corresponding types of trigger stimuli: visual (light), acoustic (sound), and somatosensory (e.g., an impulse). Since the evoked potentials of the spontaneous EEG are superimposed, averaging techniques are used to make them visible.

‘Evoked potentials’ include slow potential shifts, or, rather, slow brain potentials – the best known being CNV and P300: 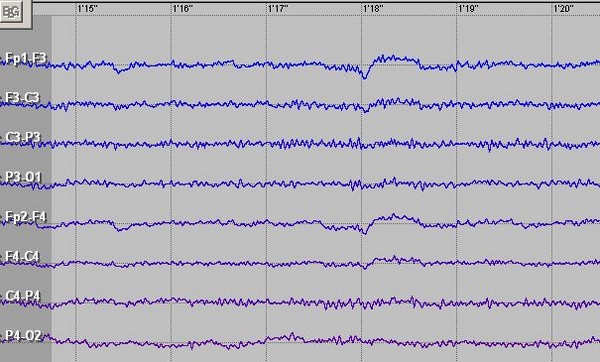 States of activation and consciousness

What level of activation is optimal for good performance? The Yerkes-Dodson law states that: there is an inverse U-shaped relationship between activation and performance.

The Orienting Response and the Defensive Reaction

The orienting response (OR) changes the organism’s activation level. This enables the organism to recognize significant stimuli and to respond adequately to them. The OR will be especially high if the stimulus represents a psychologically learned signal (e.g., when someone shouts: ”look out!”).

The orienting reaction was first observed by Pavlov and described as the ‘what-is-that?-reflex’.

The OR no longer occurs when the stimulus is repeated and provides no new information. The conscious mind becomes accustomed to it, and blanks it out – it is referred to as habituation. (Tip: Bear in mind the sound of an ambulance siren and your reaction after 1, 2 and then 5 minutes.) If the OR increases following a standard stimulus as a result of a short foreign stimulus, this is referred to as a dis-habituation.

While sleeping, the organism reduces mental and physical functions to a minimum level of activation (exception: rapid eye movement (REM) sleep). Non-REM sleep stages (1–4) are distinguished from the REM sleep. The duration and rhythm of sleep change throughout our lives.

The amount of sleep needed: 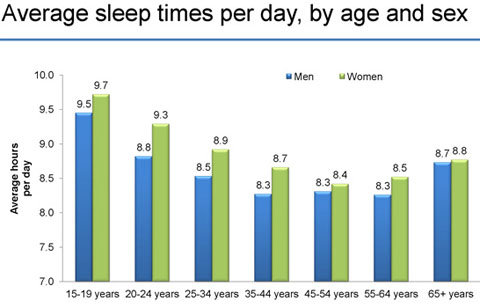 Image: Data include all persons 15 and older and include all days of the week. These are annual averages for 2012. By American Time Use Survey, Bureau of Labor Statistics.

The circadian rhythm: The sleep-wake cycle

It is a biological process that establishes endogenous oscillation in 24 hours. The circadian clock drives these 24-hour rhythms. Chronobiology is the area of science that deals with temporal body rhythms. The light-dark cycle is the most important time-setter for the circadian rhythm.

Excursus: Trials have shown that humans develop a 24-hour rhythm that encompasses sleeping and waking even without the light-based day/night cycle. The anatomical correlation of this biological clock is attributed to the suprachiasmatic nucleus. If this is repressed, any circadian rhythm is nullified, even in the presence of an external time-setter.

The chronobiology of human performance

Memory functions correlate with body temperature: the more difficult the memory task, the more peak performance shifts towards the middle of the day. Peak performance occurs:

Few definitions to help improve understanding of the sleep stages:

At night, we generally fall asleep which happens in several sleep cycles, each with 4 stages. These stages include:

The sequence of sleep phases

In 8 hours of sleep, we go through 4–6 cycles of NREM sleep and REM sleep. The duration of deep sleep phases decreases through the course of the night, and the duration of the REM phase increases.

The reason for dreaming is still unknown

You will have already asked yourself this question many times. Various theories address the questions of why we dream and where the contents of dreams originate. The only consensus of dream research is that we probably process information obtained over the day during REM sleep – to the degree that varies greatly from 1 individual to another – and that transfer of information into long-term memory occurs.

During sleep following sleep deprivation, the proportion of deep sleep increases. REM sleep is subsequently made up for (–REM rebound). When REM sleep has been selectively withdrawn during experiments (with subjects being woken in stage 5), the test subjects have displayed hyperactivity, increased irritability, and an increased degree of anxiety. 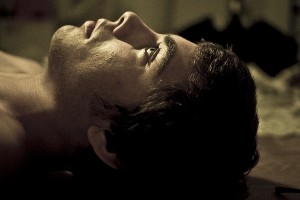 Dyssomnias are divided into hypersomnia and hyposomnia.

‘Parasomnias’ denotes the group of peculiar phenomena that can occur during sleep. This includes: