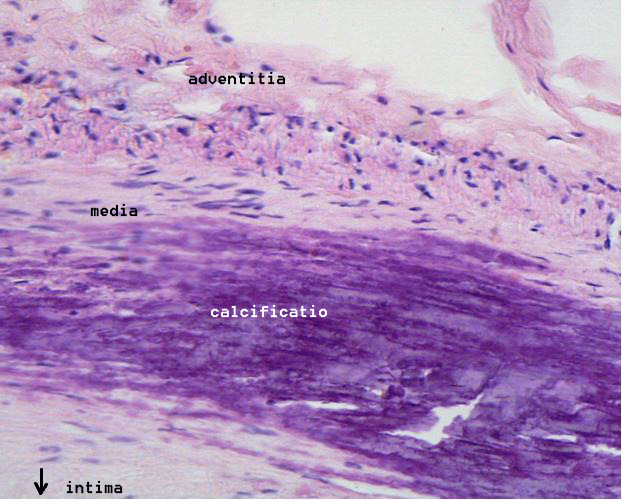 Atherosclerosis is a combination of the words “athero,” or lipid accumulation, and “sclerosis,” or thickening. It is a chronic inflammatory process characterized by the accumulation of lipids, inflammatory cells, fibrous material, and calcium within the arteries.

Atherosclerotic plaque is a sticky deposit formed within the arterial intima that causes narrowing and blockage of the arterial lumen, causing cardiovascular disease (CAD; see image). 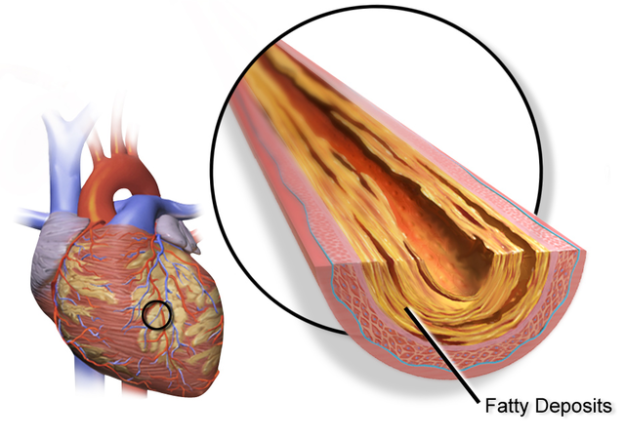 The process of plaque formation is insidious and begins with endothelial damage secondary to multiple risk factors, the most important of which are:

Nitric oxide production is decreased within the damaged and dysfunctional endothelium. This is followed by the accumulation of low-density lipoproteins and, later, macrophages within the vessel wall.

Macrophages engulf fat molecules and form foam cells that accumulate in the plaque that form the lipid core. They release growth factors, cytokines, and chemokines, and upregulate adhesive molecules such as vascular cell adhesion protein 1, intercellular adhesion molecule 1, and monocyte chemoattractant protein 1. The net result is increased monocyte attraction and macrophage recruitment to the site, magnifying the endothelial damage and dysfunction.

Increased infiltration of inflammatory cells into the plaque, smooth muscle cell apoptosis, and proteolytic degradation of the matrix transform a stable plaque into a vulnerable plaque. 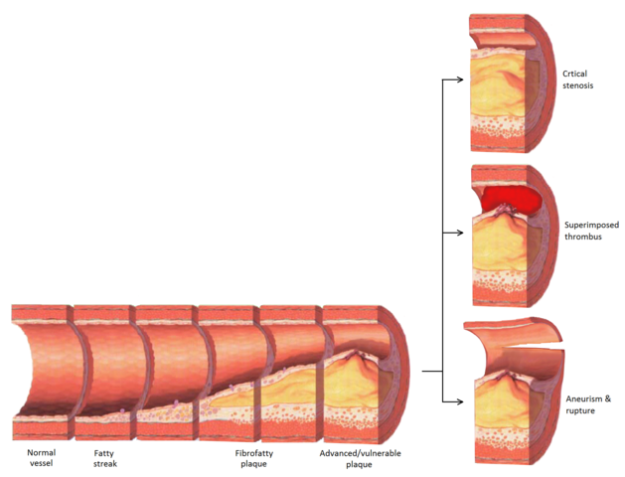 The 6 Areas of Consensus

Evidence-based pharmacological treatment is effective in cases of CAD. Recent studies emphasize that the standard treatment for patients with CAD should include the following medications.

Smoking is one of the important modifiable risk factors in the etiology of CAD. Smokers have 6 times the risk of developing CAD in the first 5 years of smoking. Smoking damages the endothelium, which is the initial event in plaque formation. The risk of CAD decreases rapidly, to 50%, after the first year of smoking cessation; the risk falls to the level of a non-smoker in 15 years.

Smoking cessation can be achieved by psychological counseling, coupled with nicotine-replacement therapy such as varenicline/bupropion treatment. Replacement therapy provides a baseline nicotine level in circulation for those who are addicted to smoking, while sparing the patient the adverse effects of other smoke components, such as tar and carbon monoxide.

Timely intervention can save patients with CAD. The efficacy of all interventions is based on the physician’s aggressiveness and the patient’s adherence to the interventions. The physician should advocate for smoking cessation, an increase in exercise, and lifestyle modifications in addition to appropriate medications.

All of these methods help reduce major ischemic coronary events, morbidity, and mortality in patients with CAD.

Cardiac rehabilitation improves outcomes for patients with CAD. The American Heart Association recommends cardiac rehabilitation with coordinated, multifaceted interventions designed to optimize a cardiac patient’s physical, psychological, and social functioning, in addition to slowing or reversing the progress of the disease altogether. Events that entail rehabilitation include the following:

The likelihood of developing CAD can be predicted by scoring the patient based on various risk factors. This is only an estimate, however, not an accurate statistic. The risk factors for CAD include the following:

There is a trend toward improvement of mortality in patients with CAD. Due to the aggressive approach and efficacy of medications, the burden of CAD is sharply declining.

The 4 Areas of Controversy

The Efficacy of Revascularization

Earlier studies revealed that coronary artery bypass graft (CABG) is the only procedure shown to prolong life and reduce mortality. Angioplasty did not show similar efficacy, thus creating a controversy. However, the Bypass Angioplasty Revascularization Investigation (BARI) trial showed that both interventions have similar efficacy and can be used to reduce mortality from CAD.

As well, the Clinical Outcomes Utilizing Revascularization and Aggressive Drug Evaluation (COURAGE) study showed that pharmacological therapy and revascularization had equal efficacy in patients with CAD. Thus, the 3 alternatives can be considered effective in the management of CAD.

The bias toward revascularization as the most effective therapy led to the creation of the second controversy, which notes that, in all patients with CAD, a catheter should be inserted in anticipation of revascularization.

However, current studies reveal that pharmacological therapy is also effective in the management of CAD. Therefore, there is no need to urgently institute catheter placement.

Studies have shown that elderly people respond well to revascularization, however. As well, there are even lower mortality rates with CABG in the elderly population compared with other interventions. Thus, the restoration of cardiac function is more important than age.

A Disease of the Elderly

Chronic CAD was initially thought to be a disease of the elderly. Recent autopsies have shown a changing trend, however, with younger people also acquiring the disease. CAD is now common in young men.

All primary and secondary interventions should be applied to all persons at risk for CAD, no matter their age.

CAD is one of the leading causes of death worldwide, affecting people of all sexes, races, and ages. Since it is a highly preventable disease, it can be controlled with primary and secondary interventions that reduce morbidity and mortality.

Effective therapy and lifestyle modifications can help give patients with CAD a long and productive life. Elderly patients should be treated with similar methods as their younger counterparts.